The awkward moment Polish First Lady Agata Kornhauser-Duda ignored Donald Trump’s outstretched hand and moved on to shake hands with Melania before she finally shook his hand, was caught on camera and it’s a bit embarrassing.

In the now viral video, Donald and Melania were on stage with their Polish counterparts, Agata and her husband, President Andrzej Duda, in Warsaw as official photographs were being taken. When it was time to shake hands, Trump shook President Andrzej Duda’s hand, then stretched his hand to Agata but she moved past him and went to Melania. 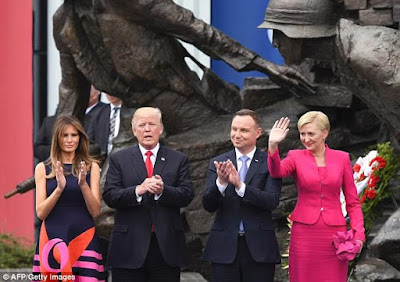 The snub was hard to miss. Agata eventually did shake hands with Trump but people can’t seem to get over the initial snub. As expected Americans took to Twitter to joke about the gaffe

“Look at that little boy pout,” another user tweeted.

“Best part is he realized it and looked abashed. Sad,” another Twitter user wrote.

It is not clear if Agata’s action was intentional, though it seems unlikely.

See the video below.

21-year-old man accused of murdering and raping a Bulgarian journalist says 'I cannot believe I did it' (Photos)
Categories: Foreign News

US Bombs ISIS Caves And Tunnels Killing 36
Rooney’s Wife Wants Him To Ask Everton For ‘Sympathetic Leave’ So They Can Talk
FIFA Ranking- Nigeria now 4th in Africa,38th in the world
Hollywood Actor Orlando Bloom Reportedly Apologises To Actress Who Was Fired After One Night Stand.