close menu
The Recording Industry Association of America (RIAA) just announced that Jay Z’s 4:44 album has gone platinum less than a week after the album’s release. Going platinum simply certifies that a record has been sold 1 million times. 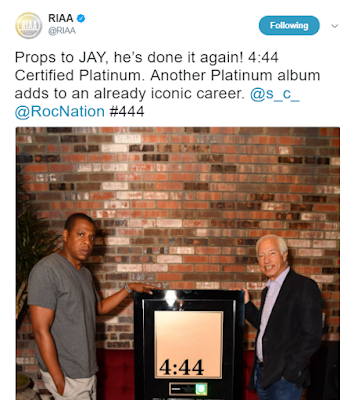 Though critics argue that the album,4:44 was released on June 30th exclusively to Tidal subscribers and Sprint customers and anyone who hadn’t signed up for Tidal prior to the album’s release wasn’t able to listen to it, unless they were also a Sprint customer, therefore it’s almost impossible for it to go platinum.
The RIAA however says, ‘Props to JAY, he’s done it again! 4:44 Certified Platinum. Another Platinum album adds to an already iconic career’.

Cristiano Ronaldo will have 7 children. His girlfriend is pregnant with the 4th
If You Cry A Lot, Then You Have This Unique Personality Trait (Psychologists Reveal)
Tags: 4:44 album goes platinum Jay Z 4:44 album
Categories: Entertainment Foreign News