One doctor was shot and killed and at least six other people were injured on Friday afternoon inside Bronx-Lebanon Hospital Center after a former doctor at the hospital opened fire with an assault rifle, officials said.

The gunman, who was wearing a white lab coat, was killed, apparently by a self-inflicted gunshot wound, the police said. He was identified by a police official as Henry Bello.

On the hospital’s website a Henry Bello is listed as a doctor employed in family medicine.

The hospital’s fire alarm system had been set off, apparently because the gunman had tried to set himself on fire.

Five the of six victims were seriously wounded and the sixth had been shot in the leg. All the shooting victims were found on the 16th and 17th floors of the hospital at 1650 Grand Concourse.
As the situation continued to unfold, at least one doctor was being treated by people inside the hospital who had tied an emergency fire hose as a tourniquet, the fire department official said.

By 3:30 p.m., the section of the hospital where the doctors were injured had been secured and the police were leading a heavily armored group of emergency service workers into the building.

Inside the hospital’s pediatric unit, a woman answering the phone who declined to give her name said that she and others were sheltering in place, unable to leave. “We are just keeping safe. We are O.K.,” she said. “All of us have to feel tense because of the situation.”

A woman who answered the phone in the hospital’s admittance office, who gave only her first name, Morgan, said that an alert went out to the staff around 3 p.m. ordering them to shelter in place. She said she was huddled in a room with several other workers. 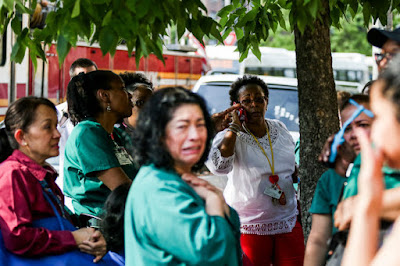 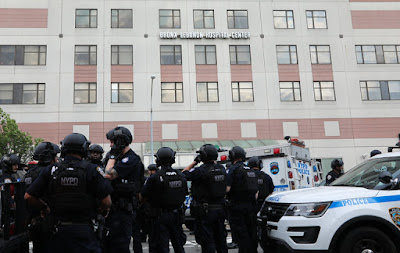 Man Tries To Carjack 3 Football Players, Gets Beaten Up Instead
Ronaldo Banned For 5 Matches
Photos: Husband And Wife’s Bodies Are Found Perfectly Preserved In A Swiss Glacier After They Vanished 75 Years Ago
12 Injured In Acid Attack At London Club