Donald Trump has just become the first president in 36 years to miss the annual White House Correspondents dinner. The last time a sitting president missed the dinner was in 1981 when Ronald Reagan didn’t attend because he was recovering from a gunshot injury, but he did call into the event via video feed.
Donald Trump has not a had a good relationship with the media so instead of attending the dinner, he chose to attend a rally in Pennsylvania to celebrate his first 100 days in office. He also tweeted his frustration with the media. 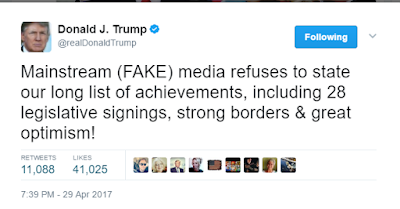 Rooney’s Wife Wants Him To Ask Everton For ‘Sympathetic Leave’ So They Can Talk
Trump cancels Obama policy for illegal immigrant families
36 killed after ‘man’ storms casino,starts a fire before burning himself to death
Mexico: Priest stabbed in neck as he said mass in cathedral. See why