The Nigerian Police Force says it has commenced investigations into the threat allegedly made by an officer Inusa Saidu Biu that he will kill 200 people If President Buhari dies.

Reports about the threat, which DAILYPOST confirmed has been removed from the Facebook wall, went viral on Wednesday.

Single Mom of 5 goes viral after graduating from Law School

“The Nigeria Police Force has commenced investigation into the unfortunate Personal comments made by the alleged Police officer named Inusa Saidu Biu on his Facebook account.

“Police officers are not to make unauthorized public comments.” 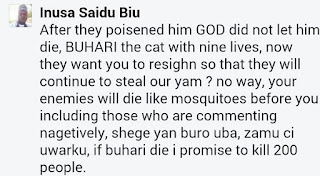 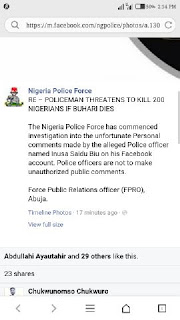 Leaked Audio: Phone conversation between a female student of OAU and her professor who wants to have sex with her 5 times before she can pass his course
Tags: Celebrities Companies Education entertainment Health Markets Music politics religion Sex Soccer Weird News world
Categories: Local News