Emmanuel Macron, 39, who is poised to become France’s youngest president ever, is married to his high school class teacher, Brigitte Trogneux, 64. Macron was Brigitte’s student but at 17, he was already professing love for his teacher who was 25 years older than him and vowed to marry her when he came of age.
Macron was classmates with Brigitte’s second daughter and most people, including Macron’s parents, thought he was dating Brigitte’s daughter, not knowing it was his teacher he had eyes for. 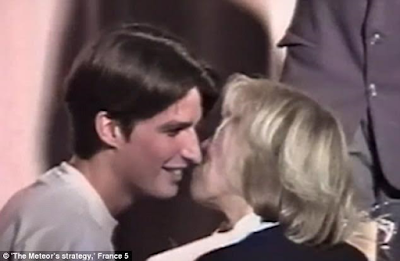 They first met when Macron was 15 and a student of Jesuit college in Amiens. Brigitte was also the drama coach and Macron was in the drama group.

He can be seen in a photo kissing her on the cheek after a theatrical performance in May 1993 when he was only 15. 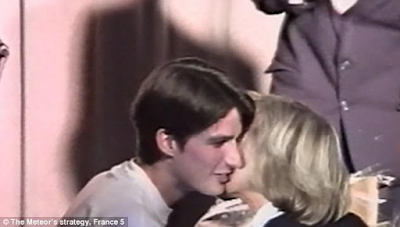 Two years later, he said to her that he was going to marry her and he did. Prior to that, his parents ordered him to end the romance with Brigitte who was married and had three kids, one of whom was older than Macron. He defied his parents’ orders and continued to see her. His parents also told the teacher to stay away from their son until he reached 18. 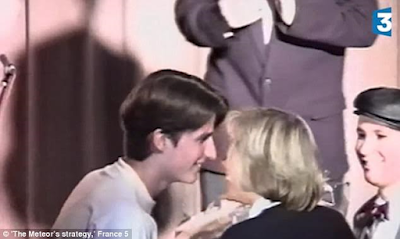 At 16 his parents sent him to Paris to continue his studies but before leaving, he vowed to marry Trogneux, who was around 40. 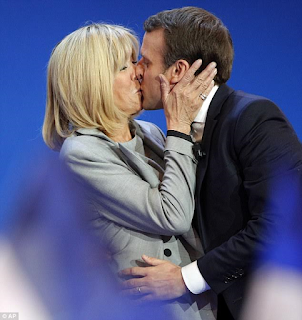 Macron is now 39 and is tipped to become the youngest ever president of France considering that he is the people’s favorite. His wife, Brigitte, is set to become the first lady at 64.

Speaking of when they first met, Brigitte who is a grandmother of seven said.

“He came to audition for a part in the play and I watched him. I just found him incredible. He had such presence. Without doubt he wasn’t like the others. He was always with the teachers. He simply wasn’t an adolescent.”

“There’s isn’t an area I have found that he’s not good at…” she said when a reporter asked her if Macron is a good politician.

Macron served as an economic adviser to Francois Hollande, and was part of Manuel Valls’ government. He founded the En Marche! movement and will face Marine Le Pen in two weeks. Macron achieved 23.75 percent of the vote compared to Le Pen’s 21.53 percent. If Macron wins the second vote on May 7th he and Brigitte will become the next residents at the Elysee Palace. Speaking of the first time Macron mentioned marriage to her, Brigitte said.

“At the age of 17, Emmanuel said to me, ‘Whatever you do, I will marry you!” Brigitte told a Paris magazine last year.

Macron, a literature lover who wanted to be a novelist and was a member of the drama club Brigitte coached spoke of how his parents sent him away to Paris for his last year of high school so as to separate them, yet he tried to keep in touch.

For her part, Miss Trogneux recalled in a television documentary: “Little by little, he overcame all my resistances in an unbelievable way, with patience.” 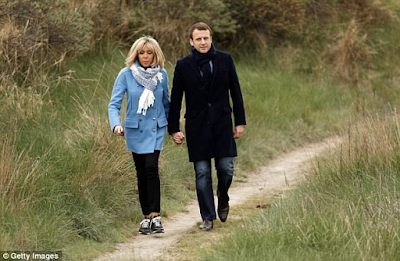 She also said: “He wasn’t a teenager. He had a relationship of equals with other adults.”

She eventually moved to the French capital to join him, and divorced her husband. They have been together ever since. amd Macron is ever proud to show her off as she campaigns by his side always.

“I don’t hide her,” Macron told a French TV channel this week. “She’s here in my life, she has always been.”

During a speech last month, the pair kissed on stage with Macron telling supporters: “I owe her an enormous amount because she has contributed to make me the person I am.”

He told of how his wife would never be ‘behind him’, adding: “If I’m elected – no, sorry, when we are elected – she will be there, with a role and a place.”