Aaron Hernandez’s fiancée and their daughter were pictured for the first time today since the convicted murderer’s suicide, after it emerged he had been planning his death for weeks.

Shayanna Jenkins-Hernandez, 27, carried a car seat for her four-year-old daughter Avielle and was accompanied by a friend as she left her mother Jodi’s house in Bristol, Connecticut.

The usually immaculately turned-out Jenkins-Hernandez appeared tired and drawn as she left the row house shortly before sunset.

Earlier in the day, DailyMail.com discovered Hernandez had been plotting his suicide for some time, giving away all of his possessions to other prisoners before he was found hanged in his cell alongside three handwritten notes.

He had also soaped the floor of his cell so that he would not be able to stand if he changed his mind. 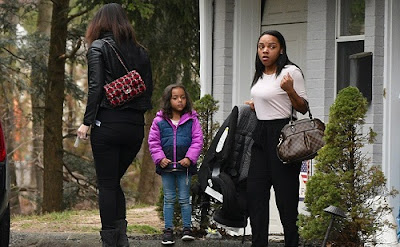